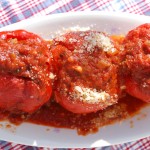 ½ + (a little more than ½) portion of meatball recipe, uncooked

Using a large serving fork or your hands, break up and crush plum tomatoes. Do not puree in a food processor.

In a medium sized Dutch oven or a deep oven proof skillet, heat 3 tablespoons of olive oil over medium heat and add the diced onion. Cook onions until softened, approximately 4 minutes, add garlic and cook for another 1 – 2 minutes, not allowing garlic to brown. Add prepared tomatoes, parsley, salt, pepper, basil and Bay leaf and once sauce begins to bubble, lower to simmer for approximately 5 – 8 minutes. As sauce cooks down, add ½ cup water.

While sauce is simmering, prepare bell peppers by cutting around stem creating an opening approximately 2″- 3” in diameter.  Allow the curved top perimeter of the pepper to remain intact, as this helps hold the meat inside the pepper as it cooks. Do not slice the entire top off of the pepper.

Using raw meatball mixture, divide and stuff peppers, packing meat to the top of the peppers. Place peppers upright in the sauce in the Dutch oven.*

Cover and place in oven.  Bake at 375 degrees F for approximately 1 hour until peppers are softened. Baste peppers with sauce about every 10 – 15 minutes and add ¼ cup water each time, as sauce cooks down.

After 1 hour, uncover, decrease oven temperature to 350 degrees F and bake for another 10 minutes, but do not allow to char.**

To serve, split each pepper, baste with sauce and sprinkle with Parmegiano Reggiano cheese

*Alternative method: If you prefer not to use a Dutch oven or heavy bottomed pot, marinara sauce may be made separately. Place stuffed peppers in a deep casserole pan and pour sauce over peppers. Follow baking procedures above.

**If you prefer the peppers to be firm, eliminate this extra cooking time of another 10 minutes. Ultimately, once the meat is cooked, you may bake them according to your personal preference and adjust the baking time.